After the COVID-19 pandemic first took hold, Nolan McCants couldn’t imagine sitting idly while the world as he knew it changed right before his eyes. He took to what he often found were the busy streets of downtown Chicago to shoot photos only to capture moment after moment of what he describes as a stark contrast.

“The photographs that I took were taken within days of the initial stay-at-home order,” McCants said. “I took them because of the starkness I’d never seen before where cities had no traffic, whether pedestrian or vehicular.” The photographer from Naperville and pastor of Harvest Church Plainfield, whose photo essay dubbed “Stillness” is sponsored by Arts Alliance Illinois, is among four artists recruited by Arts DuPage. They were granted the opportunity to showcase their artwork as part of a vaccination campaign, “Vax to Get Back”, encouraging people to get inoculated.

The initiative unites artists from all around the state to take part in creating artwork with a shared theme, contributing to public discourse about why people should get vaccinated.

Arts DuPage Director Debbie Venezia said that when Arts DuPage was approached by Arts Alliance Illinois about the vaccination campaign, she knew it had to be a unified effort, if the arts scene wanted a return to normal; especially after seeing how the industry has been impacted by the pandemic. Besides enlisting McCants to craft a photo essay, Arts DuPage turned to George Berlin and Ryan Jolly, both of Glen Ellyn, to produce animations, and Fernando Ramirez, of West Chicago, to create a sculpture.

Venezia said the artists essentially had no guidelines, except to create a piece of art in line with the theme posed by Arts Alliance Illinois’ vaccination campaign. Each individual received a grant from Art Alliance Illinois for their participation in the initiative.

In the opening vignette of his photo essay, McCants recounts how life changed when the pandemic first took hold. “The way the story is told in the video walks you through the emotion, the reflection, the thoughts that we all had collectively in those moments,” McCants said. 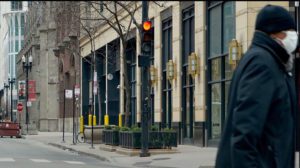 In another scene, the photo essay highlights what McCants experienced as he walked underneath the Chicago Transit Authority’s L-Track in downtown Chicago. Venezia said she finds what he captured “haunting.”

“Here you are under the L-Track,” Venezia said. “There’s noise; there’s life; there’s traffic everywhere. It’s backed up. To go from what your perception of what the city is and then you compare that to the photo he took where you’re standing in that same place and it’s desolate. … It’s a vision you never expected to see.”

The photo essay closes with a juxtaposition using an image taken of children playing outside in summers’ past pre-COVID-19. McCants said he intended to convey what life could be like if everyone gets vaccinated and becomes part of the solution. He believes his photo essay has the potential to effect positive change both locally and globally.

“It’s not combative; it’s not controversial,” McCants said. “It simply states or shows what was and in some cases, what still is. So, it’s not arguing.” McCants’ photo essay has been shown at the Tivoli Theatre in Downers Grove in recent weeks. The photos that make up “Stillness” are now on display as part of McCants’ body of work at his gallery at The Jhou B. Art Center, located at 1029 W. 35th St. in Chicago.